Bummed out by the cookie-cutter gifts at the big box stores this past weekend? It's so ho-hum (yawn). However, if you'd like to purchase some distinct and unique artwork from me for holiday gift-giving season...here's the deal:


PET PORTRAITS
First of all, it's not too late to order a customized pet portrait. All I need is a decent photo to work from and, if you're local to Saratoga Springs, New York, I'll come and photograph your pet myself. If Muffie has passed on, that's okay, just send me as many photos as possible and I"ll work from those. Contact me for size and price details. Yes, you can afford it. Such an thoughtful, special and amazing gift that will last a lifetime. Thrill the pet lover in your life (you'll probably make them cry with joy)! 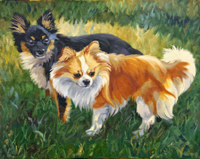 LAY AWAY
I take installment payments. Always have, always will. I understand you. It's like layaway at the big box stores without the hefty hidden fees. See something you like or have an idea for a custom painting? Contact me and we'll work out the details together. I want to make it easy for you.


GIFT CERTIFICATES
Some people are especially difficult to shop for. If you're uncertain about what someone would particularly like from my collection of original oils, Giclee Fine Art Reproductions, or gift items...consider a gift certificate. The recipient will appreciate your thoughtfulness as they get the EXACT gift they'll adore.

If you can think of another way I can help you with your holiday shopping, please don't hesitate to contact me. I appreciate your suggestions and I'm here to provide the best service that I possibly can.

Looking forward to hearing from you,
Sharon 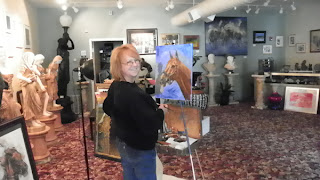 Posted by Sharon Crute at 7:09 PM No comments:

November in the North

So much gratitude is in order to those of you who have wished me positive thoughts and good wishes via e-mail, Facebook, Twitter and any other internet platform I've overlooked. I sincerely thank you for your good thoughts directed my way. It's spiritual...thoughts become things and such...I so appreciate and love you all.

You've also asked how I'm doing in the cold weather after moving up to the north land from Florida. Don't forget that I'm a native New Englander and I'm doing...okay. Yes, it's an adjustment. However, a brisk walk in the night air that filled my lungs with the pungent scent of late fall produced an unexpected nostalgia for playing Ringolevio in the streets of my childhood memories. Today my earlobes chilled on a hike through the local swamps as I observed the sun setting low in the sky way too early. Football and Thanksgiving...it couldn't be more appropriate here in stark November. 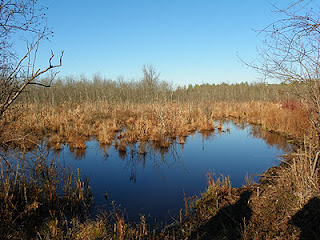 Dare I tell you that I can't wait until the big snow? When my dearest declared that snow was white and what was the big deal - ha!


Posted by Sharon Crute at 7:20 PM No comments:

If you're as impatient as I am, you understand the wait is excruciating. The day eventually arrives in it's own sweet time and action pervades my good sense. On an recent episode of NOVA the genius of Einstein revealed that time slows for those of us to choose to be in motion. Huh? 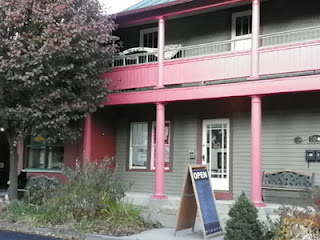 Landscaping has been frost-bitten but you get the gist of the loveliness of the street. Each merchant chooses and nurtures the plantings themselves. 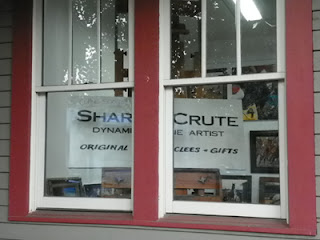 My signage is on order. This is my track sign from last summer and it'll have to do for now. 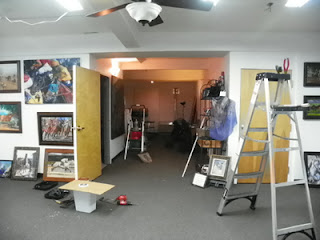 This is the view looking in back toward what will be the man cave of print production and gift item creation. 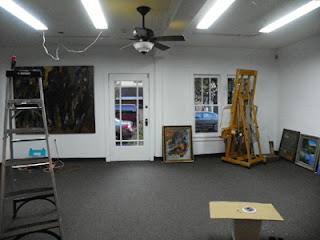 Looking out to the street. Lighting is a work in progress. I love the cool daylight fluorescent lights for painting but we'll need some tracks to light up the artwork.


Officially, we'll be open on Tuesday, November 15th. Taking advantage of a good dinner crowd, we plan to be open until 8:00pm in the evenings as is the rest of the street. Experimenting with schedules for a couple of weeks will determine a permanent open time.

The address is: 70-B Beekman St. in Saratoga Springs, New York. If you can, please stop in - I'd enjoy meeting you and showing off my paintings.
Gratefully, Sharon

Here's a few of my personal Breeders' Cup connections as experienced via my long summer at the Saratoga meet:

Think names aren't important? Sometimes they're everything. Stopshoppingmaria became an instant fan favorite at Saratoga even before she broke her maiden which she accomplished easily in her second start by over nine lengths. She became the talk of the two-year-old fillies. Not a bad second place finish in the BC Juvenile Fillies Turf either.

Some of the owners of Turbulent Descent (there are several and some are first timers) came into my booth to see my artwork but I wasn't there (argh)! Michael did his best to coax them into returning to meet me. Their excitement of being at Saratoga with such a nice filly was understandable, but a few did come back. When we were in California many years ago, Michael galloped a couple of horses for Turbulent Descent's trainer Mike Puype - most notably, Old Trieste. The two of them had a few minutes to chat when Mike P. also visited my booth. The next day Turbulent Descent blasted the field in the Test Stakes. The gang had to be so disappointed with the trouble she experienced in the BC Filly and Mare Sprint, finishing fifth.

Early one morning I was photographing reference at the Oklahoma training track. A very amiable boyish-looking man walked up to me and introduce himself - George Bolton. Okay, I'm embarrassed that I didn't know who he was at first but quickly assessed his connection to Stonestreet Stable. We discussed The Factor and he invited me into the paddock that afternoon to photograph a filly he was extremely high on - My Miss Aurelia who was running in the Adirondack Stakes. In the paddock, George was too busy to talk to me as he was engaged in crowd control and ambassadorship, but I did manage to invite him to my booth. Unfortunately, he never made it. But his filly won the Adirondack and she also won the BC Juvenile Fillies convincingly. 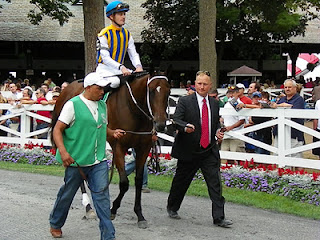 My Miss Aurelia prior to winning the Adirondack Stakes.

Last year I had the honor of creating the commission of Big Drama as a gift for his owner, Harold Queen. Winner of last year's Sprint Eclipse Award and last year's BC Sprint, this year he didn't repeat and finished seventh. I still enjoy my personal connection and loyalty to this professional racehorse. Just love him.

BC Classic winner Drosselmeyer looked small and thin to me as he was brought to the paddock for the Sword Dancer Stakes. 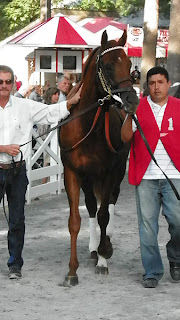 This gal, however, looked magnificent... 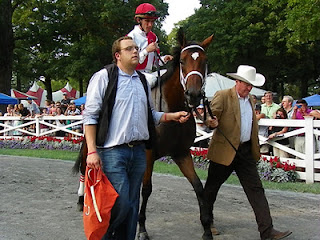 Havre de Grace on her way to her victory in the Woodward Stakes.


So there you go. From the artist's perpective.
Love to all the horses who ran their best, Sharon 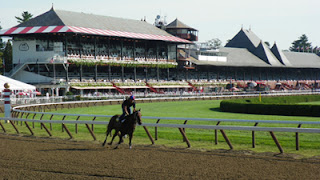 Posted by Sharon Crute at 4:25 PM No comments:

Big perk: life drawing class with a nude model sponsored by the Saratoga Arts Center. Time-honored method of honing drawing skills that's been practiced for a few hundred years or more by the great masters. Volume, line, form, negative space, direction, etc. not to mention depicting personality and mood are the challenges for wannabe draftsmen (and women). 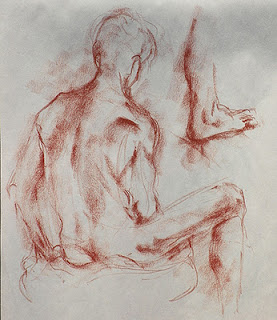 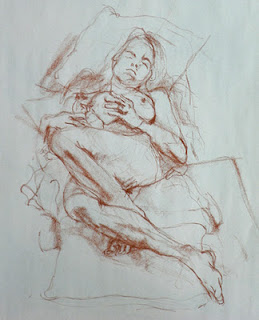 I'm a bit rusty. It's been several years since I've had the opportunity to participate in life drawing class, but I promise you, I'll get better.
Love, Sharon 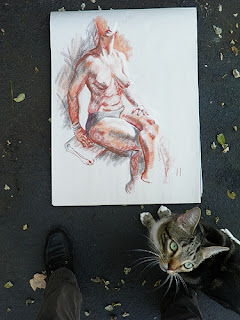 Not bad Mom, but you may want to consider composition so that next time
you don't cut off the head and feet.
Posted by Sharon Crute at 8:31 PM No comments: