State of the Arts

Purusing a couple of interesting articles today in this month's ARTnews magazine regarding the current art market. You can read them for yourself online at their website. Below are a few quotes from "A New Creativity" by Ann Landi with some unsolicited comments from you know who.

"...a number of prominent critics predicted that the economic nosedive could be a good thing for the art world at large - 'a vital correction'..." Kind of like what's happening in the thoroughbred racing industry on several levels. Hmm, yes and no.

"Difficult times bring out the best in the best artists. When the economy falters, there can be a remarkable growth of seriousness in art" - David Ross, director of Albion New York. Oh, we're serious alright. Most of us have leaped over to the left-side brain trying to figure out how to sell it ourselves. Talk to any "serious" artist and you'll discover a new bright and shiny businessperson.

"I'd say the bohemian fantasy is sweet and sentimental, but rather insulting to artists..." - Christopher Knight, art critic, LA Times. Personally, I like three squares and electricity.

"We're going to see a shift toward work that's more psychological and introspective and more out of an old-fashioned studio kind of work." Gary Garrels, senior curator of painting and scultpture, SFMOMA. And you thought we were all crazy before the economic downturn.

"People who travel light and do things that are contrary and ephemeral are going to have a good moment." - Rober Storr, dean, Yale U. School of Art. OMG, my time is finally coming!!!

"Artists are basically problem solvers. They will respond to whatever the situation is in completely unpredictable ways." Bonnie Clearwater, dir., Mus. of Contemporary Art, N. Miami. Heh, heh, don't say she didn't warn you.

And from the article "How to Buy in 2009" by Milton Esterow:

"I think we will also see better art produced. I think in times like these artists will spend more time considering the art they are creating, instead of being driven to produce art for the marketplace." - Roland Augustine, Pres. Art Dealers Assoc. Relatively speaking. That mean old mother of necessity dictated that we'd also increase inventory while considering a new direction. Aren't all serious artists constantly working to improve skills, technique and make a compelling statement while their at it?

"Collectors are obsessive, compulsive, and competitive people who always like to get the best first." - Don Rubell, collector. Mr. Rubell, call me.

Have you hugged your artist today?
Posted by Sharon Crute at 3:09 PM 2 comments:

I love cows and I love trees but I don't like to paint 'em. Passing the pastoral back to the landscape artists who execute them lovingly, convincingly. Paintings created with reverence and endearing joy for the breezes, sunshine, birdsong, bugs or whatever else sneaks up behind them. 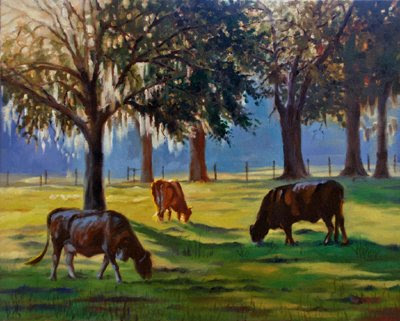 "Bovine Theory" 16"x20" oil on canvas
Now, here's what I do like: the challenge of portraying speed and power. Brushwork, flashing color spots and intense expression creating the thundering whirl that becomes a horse race. 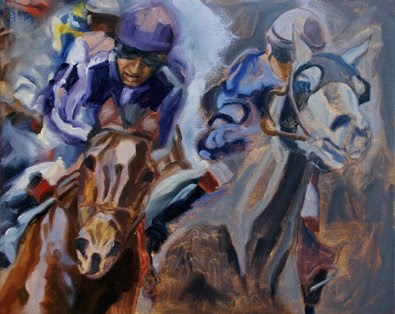 Started oil , 16"x20"
Maybe not so thunderous anymore with all the new synthetic surfaces but it's dynamic movement nonetheless.

“Scientists tell us that the fastest animal on earth, with a top speed of 120 feet per second, is a cow that has been dropped out of a helicopter.” - Dave Barry
Posted by Sharon Crute at 6:51 PM No comments:

Landscape artist extraordinaire Linda Blondheim and moi hung out with Misty Morning Foxhounds yesterday, a recognized drag hunt originating from Gainesville. Drag meaning no critters are harmed in the sport.
Think of 28 degrees on Saturday morning in Boston, 30 degrees in Ocala, Florida. We started late. 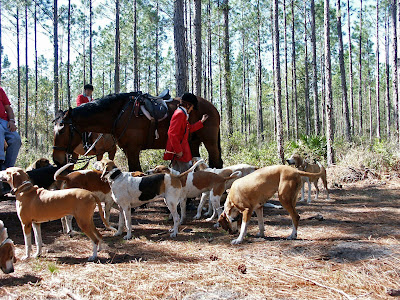 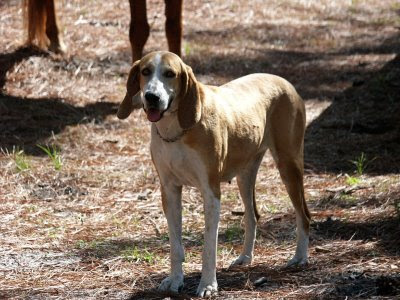 This club doesn't mind at all if you show a bit of love to the hounds. These doggies are endearingly affectionate yet professionally dedicated to their business. 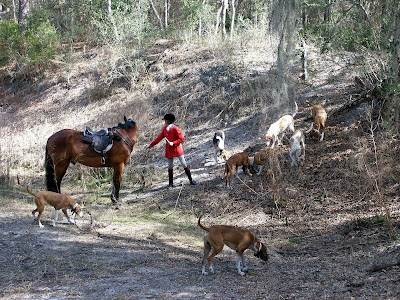 One of the "kills" took place in an ancient sinkhole. Because this organization is a humane drag hunt, scent is dragged through the woods using a leather sheaf doused with anisette. With their amazing sense of smell, the hounds follow the trail to specified "kills", a paper bag filled with biscuits. 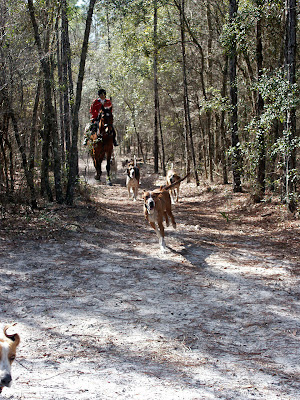 The enthusiasm and excitement of the hounds and riders is adrenaline charging. Their baying howl is the stuff of 1930's British film. In the far distance, the sound is eerily nostalgic and mysterious. 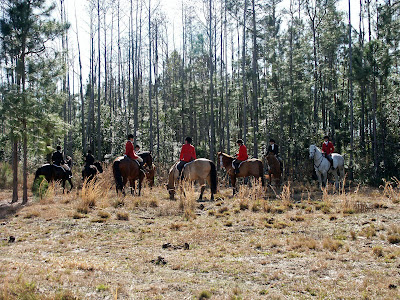 The hunt relaxes on a break.
Linda Blondheim is a nationally renown Florida landscape painter. Her perception was intriguing to me. Landscape by her definition is shimmering light, tactile texture, distance, subtle color palettes and unusual shapes. I saw horses and hounds speeding at full tilt through the woods. Art for every need, taste and preference.

"And those who were seen dancing were thought to be insane by those who could not hear the music." - Friedrich Nietzsche
Posted by Sharon Crute at 8:02 PM 5 comments:

I'm working on a news release announcing my contract with Hadley House. Signing on with the licensing division will eliminate the daunting and time consuming chore of filling huge orders with our limited resources. Two heat press machines, orders for hundreds of mousepads and/or t-shirts, pressing one at a time - you get the picture. Time better spent in the studio and promoting. After being profiled in the November issue of Art Business News, the offers flowed in from many sources. Michael researched various firms and negotiated a sweet deal with Hadley. I'm thrilled and looking forward to a profitable relationship.

Speaking of daunting, I've open an account with the social-networking service Twitter. There's a learning curve, as there was with this blog. So far, I find it quite fascinating with a ton of marketing potential. You can see my recent "tweets" on the right sidebar.

"Money is not the only answer, but it makes a difference." - Barack Obama
Posted by Sharon Crute at 8:02 PM 2 comments:

I Want to Go to Ireland

Yes I do. What wonderful, engaging people the Irish are. And they love to party and they love horse racing. What more could I ask for? 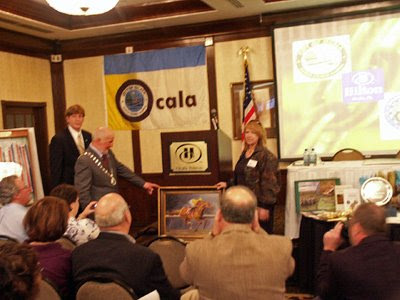 Moi presenting my painting of "Curlin" to Mayor Mick Deely of Newbridge, Ireland.
In my biased opinion, I think the Irish are the best horsemen and women. Observing their fine skills while working amongst them in my California days, these people really love their horses. You can read more about our Ocala - Newbridge Twinning Ceremony here and view more photos here.

After the ceremony, it was on to a perfect day of racing at the OBS Day of Champions Presented by Darley. Weather was outstanding and the crowd was huge. Photo ops abound as I hang out at the 6 1/2f pole on the outside fence and get shots like this: 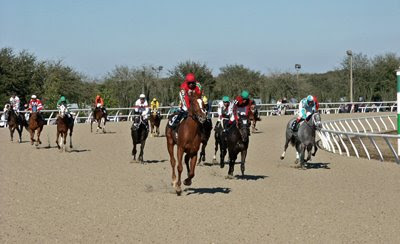 Pulling up after the big race, how often do fourteen horses stay together in one frame? Looks like a painting to me...

The day ended with an incredible party hosted by Darley at Golden Ocala. First class all the way.

"Poverty, I realized, wasn't only a lack of financial resources; it was isolation from the kind of people that could help you make more of yourself." - Keith Ferrazzi 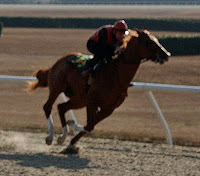 Friday I drove out to OBS to watch the two-year-olds breeze. This use to be a mandatory requirement for buyers, but now the videos are available online, on your cell, on your ipod, whatever. Technology changes everything. Birdsong and morning sunshine not included.

Saturday night I attended a party for Ocala's soon-to-be-twinned city Newbridge, Ireland at the Hilton. I asked - sister city and twin city are the same. I forgot to ask if we could be assigned more than one, therefore, San Rossore, Italy hangs in the balance. Regardless, the Irish are the most enjoyable people to party with in the entire free world. Tomorrow morning ushers in the official ceremony of "twinning". Then it's off to the races at OBS.

Relief news: Michael and I are on the guest list for the Darley party at Golden Ocala. Duh, it's Monday night, not Sunday as I previously assumed.

“If this humor be the safety of our race, then it is due largely to the infusion into the American people of the Irish brain.” - William Howard Taft
Posted by Sharon Crute at 8:21 PM 2 comments:

My first year participating at the H.I.T.S. Equine Art Gala at Golden Ocala. To say it is a spectacular facility would be an understatement. 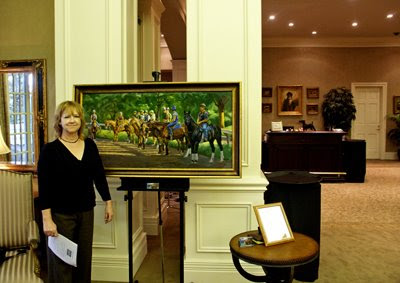 The crowd was modest yet steady throughout the evening. 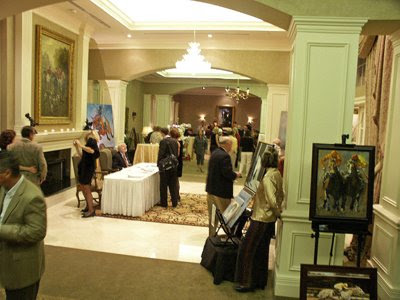 "Happiness often sneaks in through a door you didn't know you left open." - John Barrymore
Posted by Sharon Crute at 8:08 PM 2 comments:

I love to work. I love to be busy. Swamped in fact. Events in the coming week should be at full throttle. 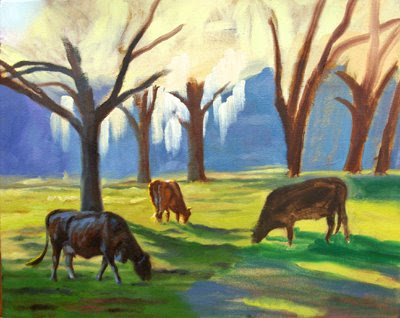 Started oil on canvas, 16"x20"
No more pastorals for awhile. I'm getting the evil eye from my landscape artist friends. Just kidding! The dynamic calls...

"One of the worst things that can happen in life is to win a bet on a horse at an early age." - Danny McGoorty, Irish Pool Player

Solid two weeks and then some to finish this painting. My art history teacher used to call this type of composition "chains of bodies in space" a la Philip Rawson of "Drawing (Appreciation of the Arts)". I still have that tattered and underlined tome, spine stabilized with masking tape. She told me it would become my bible. It didn't. Yet her scholarly enthusiasm for great drawing remains a vivid memory of a brilliant, matronly lady, gliding in and out of projected images in the darkened classroom, huaraches squeaking loudly.

"Just Horses", oil on canvas, 24"x48"
I call it "Just Horses" because some who may not be familiar with thoroughbreds often have preconceived notions about their dispositions. Yes, they're hot-blooded, high-strung athletes but they're also intelligent and curious, standing quietly on the track just like this, observing the daily goings on around them. It's a moment for horse and rider to relax before or after training.

“Drawing is like making an expressive gesture with the advantage of permanence.” - Henri Matisse
Posted by Sharon Crute at 6:45 PM 3 comments: 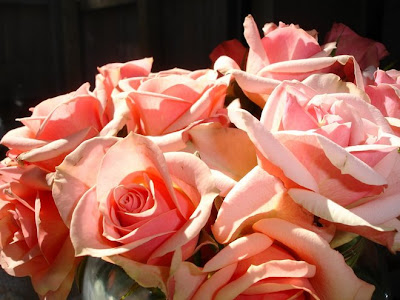 My mother would say to me when I was a young, "Surround yourself with beauty and beautiful things." Although I've strayed from that sage advice, I remember her point well: immediate environmental milieu would soothe me through the tough times. Of course she was right.

Which brings me to why I adore The Blushing Hostess Entertains blog. The Hostess writes in a smart style that's witty yet elegant. I can almost hear her purring voice imploring us to acknowledge a modicum of grace in our daily hectic endeavors. Her blog is to be savored, akin to sitting down at the dining room table, sipping a glass of pinot noir while leafing through the latest Neiman Marcus catalog.

These days the lovely, simple niceties that would - rather should - enhance my crazy life take a far back seat to the serious business of art making that commands priority. Time, my dears, time.

Thank you Hostess, for featuring my artwork on you beautiful blog. What an exquisite gift.

"For his heart was in his work, and the heart giveth grace unto every art." - Henry Wadsworth Longfellow
Posted by Sharon Crute at 7:43 PM No comments: