I love traveling and driving around the country but my lower spine no longer agrees. This past week has been filled with trips to the chiropractor, ice and aspirin. Everyday sees improvement but what an annoying inconvenience. Taking care of business as best as I can muster - making contacts, going over the books, planning the summer and beyond. Never ending things to do in the marketing department. Nancy Moskovitz, one of the awesome artists from our salon group "Out of Hand Artists", lent me a cd to listen to on the trip. "Eat That Frog" by Brian Tracy deals with time management and overcoming procrastination. Loved it! I realize I have several ugly fat frogs (dreaded, put off tasks) to eat and his suggestions for getting them done are excellent. I always have a feeling of accomplishment when I get the inevitable done, today was no exception. Books are totally up to date as are - incredibly - bank statements! Now I'm ready to get back into the studio.
Posted by Sharon Crute at 3:55 PM No comments:

Postcards from Lexington (and other travels)

Exhausted yet content. These trips are always a grind but well worth the long hours of driving, bad food and lack of sleep. To begin, we headed off to Hot Springs, Arkansas to pick up some artwork from my incredible gallery rep, Gallery Central. The owner, Bess Sanders who is a dynamo in every respect managed to get three of my paintings into the "Oaklawn Room" at the 2007 Southern Living Idea House. Cool, huh? I need about ten more reps around the country just like her...

Spent a bit too much time circumventing the wild fires in the southeast and messing around in Hot Springs so had to forgo Paducah. Another trip. Straight on to Louisville, Kentucky to visit the Kentucky Derby Museum and Churchill Downs. I'm embarrassed to admit that it was my first visit to Louisville, especially in light of living in Lexington for about nine months during the mid-eighties. 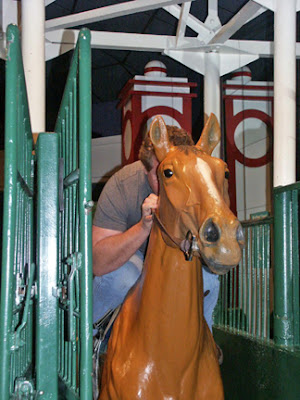 Mike busting out of the gate. He did it for real more times than can ever be counted.

The museum was wonderful. Very hands on and educational even to two old race trackers like us. Too numerous to list all the great features and exhibits, just the personal highlights for me. 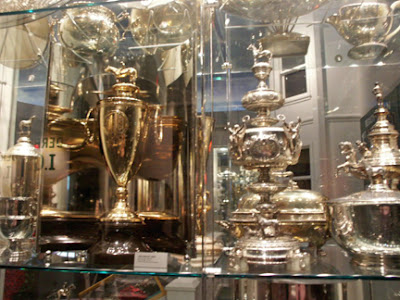 L. Kentucky Derby Trophy; R. Replica of the Woodlawn Vase.
I loved the two huge glass cases containing various prestigious racing trophies. Above are the Kentucky Derby Trophy won my Majestic Prince in 1969 and a replica of the Woodlawn Vase, the most valuable trophy in all of sportsdom. It was created by Tiffany and Company in 1860 and safely buried during the Civil War to protect it from being turned into shot. Very romantic. 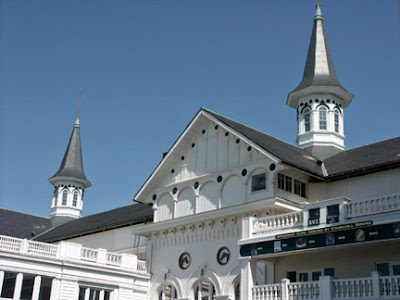 Churchill Downs twin spires as viewed from the paddock.
It was a week day after the Derby and racing returned to normal. Michael duked an usher into bringing us upstairs in the exclusive Turf Club to view the incredible glass sculpture created by artist Ken vonRoenn Jr. It's a replica of Churchill Downs replete with over 4,000 hand blown figures. Look at the individual figures (hats 'n all) in the background cheering on the horses...amazing. 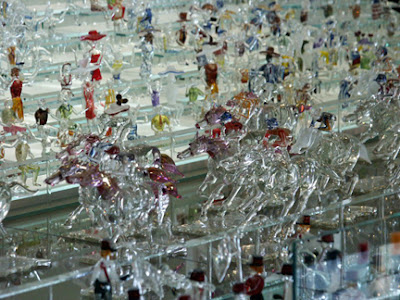 Onward to Lexington to attend a soiree fundraiser for the High Hope Steeplechase on Saturday night. Kentucky folks make networking easy and enjoyable with their approachable friendliness. Sunday was the steeplechase at the Kentucky Horse Park (spectacularly beautiful!) and my exhibit. I think my booth looks better than ever although the top still looks like a wrinkled bed sheet regardless of how tight we pull. 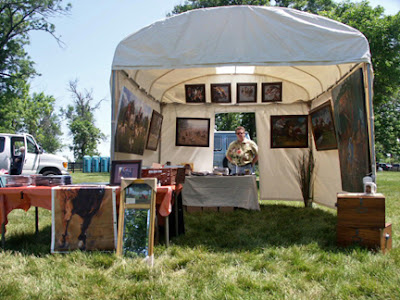 Michael had a chance to catch up with Gary Stevens who was commentating the steeplechase for TVG and also calling the last amateur race. He told Michael that he'd try to make it up to see my booth but was inundated by adoring autograph seekers - another side to fame. We watched him try to come up the hill to see us. However, because Gary is such a class act, he sent up the cameraman from TVG who crouched in the back of my booth shooting my paintings, me and anyone who wandered in to chat. Way, way cool. Can't say that anyone received air time but one never knows...Hall of Famer Chris McCarron did make it up the hill and he and Michael chatted out back for awhile. Chris has started a jockey school in Lexington. 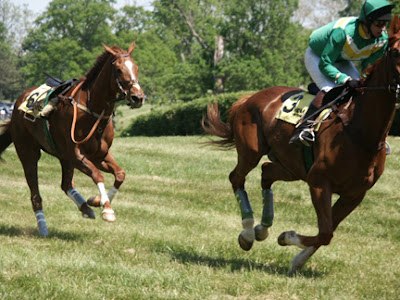 Loose horse during a steeplechase race. Boy, can they ever jump without a rider.
Posted by Sharon Crute at 6:52 PM No comments: 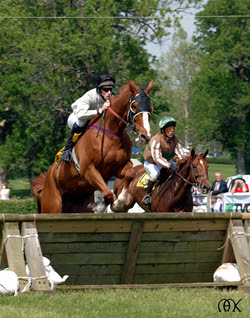 Lexington beckons again as I head off to Bluegrass Country. I'll be exhibiting at the "High Hope Steeplechase" on Sunday, May 20th. Please come by my booth to say hey if you're there.

It's a full schedule until I get there however. First I'll stop at Gallery Central in Hot Springs, Arkansas to pick up some of my work from my most excellent show last month. Then it's northbound to Paducah, Kentucky to check out the artists colony. This is especially interesting to Michael and I because of the Artist Relocation Program with incentives offered to artists to move on in, including below-market interest rates, tax incentives and health insurance packages offered by the Kentucky Arts Council to name a few.

Kentucky Derby Museum is next on the itinerary. FTBOA generously comped us some tickets and I know you won't believe this but - I've never been to Churchill Downs! (Michael has of course) Supposedly, I have a painting hanging in one of the offices within. After that, it's onward to Lexington where I'll visit with my cool gallery representative, Fayette Gallery. Hopefully the tent will be set up on Saturday afternoon and then it's to the nearest sports bar to watch the Preakness. Go get 'em Street Sense!
Posted by Sharon Crute at 7:13 PM

I just deleted the post about my day off at Ponce deLeon Lighthouse last week. I don't understand why some posts have trouble with images and others display them all. The images weren't showing even though they did for days, it looked lame, so...out it went. I went into help and no one seems to know why. Anywhoo...it might be time to consider a service I actually pay for and then I can bitch about these glitches. 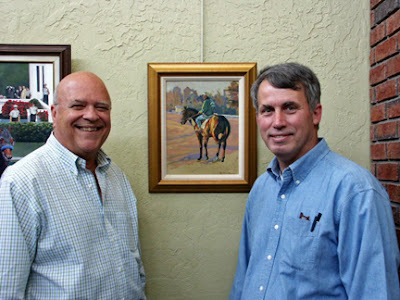 Richard Hancock and Booth Malone in front of one of Booth's paintings.
Today Michael and I met artist Booth Malone who exhibited in the Florida Thoroughbred Breeders' and Owner's Association's "Masters of Racing" show this past winter. Booth is an awesome painter applying luscious brush work and gorgeous color in his paintings. We met him at the FTBOA where we were accompanied by Dick Hancock, Executive Director. After chatting a bit we drove over to my hopelessly messy studio and then out for some lunch. I did get to show Booth around Ocala briefly, driving down "Millionaire's Row" to see some incredible horse farms. Booth is wonderfully talented, and hard to believe, mostly self-taught. He makes trips to Florida a couple of times of year and promised to stop by for a visit whenever. We'll look forward to it. 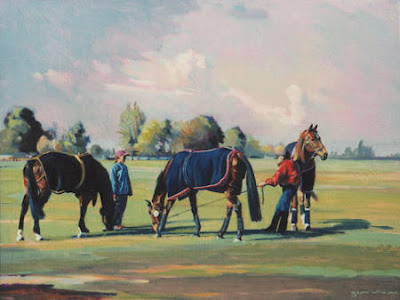 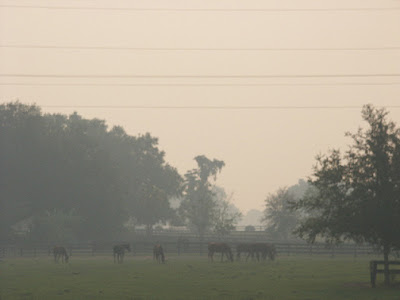 Ash covered my car as I left early this morning to drive out to Winter Haven Farm to pick up the approved mural comp. I took this photo of the smoke-laden haze hanging over the landscape. Wild fires have been raging throughout north central Florida and southwestern Georgia. The winds shifted last night and now the air is dangerously thick.

We had another productive meeting last night of our artist's salon, "Out of Hand Artists" (OOHA). Who knew we'd turn into such a powerful group? It's organized around networking for business and marketing. Always a ton of information to share with each other and the camaraderie of just getting together to talk art stuff is amazingly supportive and creative. The members are all pros involved with the serious business of furthering their careers and their achievements are inspiring.
Posted by Sharon Crute at 9:15 AM No comments: 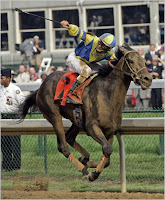 What a great day at the races. No, I wasn't at Churchill Downs. I, like most watched from my living room with the company of my sweetie, friends, Coronas and Fritos. Michael and I made our losing wagers early at Ocala Jai Alai boxing exactas with Curlin on top. So I won't be doing any paintings of Curlin - yet.

I was okay with the playing of "My Old Kentucky Home", usually a kleenex moment. Empathy abounds as I understand the work, work, work and disappointments, heartache, perseverance, exhaustion, determination and oh, did I mention work...that goes into the daily grind of training race horses. That's why the floodgates opened as Calvin Borel weeped ecstatically on his trip to the winners circle. Yeah Calvin, I feel ya and I know what you've gone through to get there.

Okay, I know I'm sounding like the dreaded 4-F emotional female, but I've been there, done that. Not much gray area for the lifers involved, it is a wild ride of insane highs and devastating lows. Interesting that NBC followed the Derby with an hour long emotional story on Barbaro. Heart wrenching and sugar-coated, the real issues about horse racing are still not being addressed and the uninitiated hasn't a clue. Things like, oh, you know, rampant drug use.
Posted by Sharon Crute at 9:15 AM No comments: 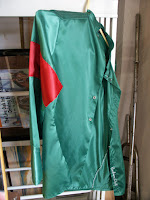 Seems like just a couple of years ago I met Razouk Daher while painting on the sidewalk during Travers week in Saratoga Springs, NY. He fell in love with "Paydirt" and upon learning that the original was sold, asked me if I could paint in the silks of Buckram Oak on the giclee.

When Michael and I delivered the customized giclee to the Buckram Oak offices in Fort Lauderdale, Razouk gasped when he saw that I had painted a red band around the body of the silks instead of the sleeves. To this day I can't understand why made such a stupid mistake, but it was off to the nearest art supply store for paint and brushes and I fixed it right there in the office.

As I painted away, Michael and I had the fortunate opportunity to chat with Razouk and get to know this engaging, personable man with a love for espresso and all things coffee. He spoke of his origins (Jordan and Northern Africa), his feelings for his adopted country, the U.S., his passion for horse racing, and his deep love and respect for Mahmoud Fustok, the owner of Buckram Oak Farm. 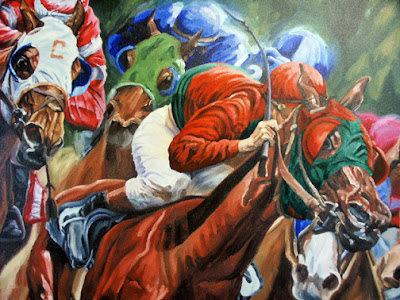 So it was with melancholic sadness that I picked up the Buckram Oak version of Paydirt today and replaced the silks with the colors of Four Roses Thoroughbreds. The farm was purchased last year by Kassem Masri, a long-time friend and business associate. Interestingly, the colors are still red and green but arranged in geometric blocks. 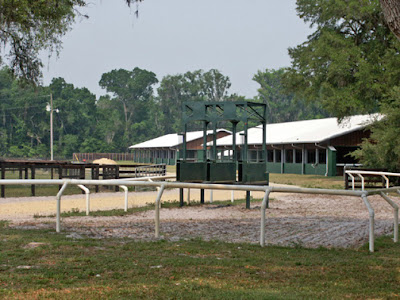 While the farm in Citra was being renovated for Buckram Oak, Razouk told me my artwork would paper the walls of the office.

Mahmoud Fustok was killed in a freak, tragic accident while jogging near his home in Pompano Beach.
Posted by Sharon Crute at 2:59 PM No comments: