Twenty-four hours or so remain in the first round of public voting. The top ten (from over 1,700 artists) are announced this Thursday and the voters will continue to choose winners from that drastically whittled list.

This is the second year for the competition and it has attracted some impressively flashy installations containing all-encompassing shows of light, sound and movement. These extravaganzas seem to be the front runners for attention grabbing (and votes) along with varying pieces of incredible originality. News of the quarter million dollar top prize has spread across the planet and this year's entries are on mega-steroids boasting a cast of collaborators. So, what chance has a 2-D traditional oil on canvas (yawn) even if the format is large and multiple and explores boundaries of speed and spatial relationships?

Not much, even if last year's winner was a gigantic oil painting of open water by Ray Ortner. That was last year...this year's entrants include a 25,000 lb. flying pig, after all.

My experience with ArtPrize has been nothing short of amazing. Being chosen by a private curator to exhibit at the DeVos Place Convention Center was an extreme honor. My piece hangs just inside the front doors and is viewable from the street. It's my personal magnum opus and assures me that I CAN be competitive, especially within genre. Yes, I'm already planning for next year. Oh, and I did get a nice shout out on the local news station's website: see it here.

"Some people don't like competition because it makes them work harder, better." - Drew Carey
Posted by Sharon Crute at 3:23 PM No comments:

If you're in Grand Rapids, Michigan for ArtPrize:
AND you love horses and painting:
For your consideration, please see my piece at the DeVos Place Convention Center: 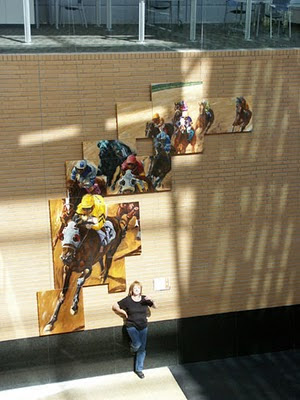 "Diagonal"
It's nine separate canvases joined together to create a cohesive image. My inspiration came from an old found black and white photo. I developed the flow of the canvases to echo the direction of the horses coming around the turn. Total size, approximately 13'6" x 13'6". For more info, click here.
My vote up code is:
41451