A few thoughts, experiences and happenings from the summer.

August 24, 2016 was the tenth anniversary of this blog. Web logs, soon to be called blogs were the latest thing ten years ago and there was a full-out popularity contest for readership and numbers of comments. Monetized blogs actually made a profit and blogs like mine were public journals of trials and successes. Michael was nearing the limit for his tolerance of the unscrupulous ethics in the racing biz and I was at the zenith of a successful painting career.

Some of my posts were negative and I pissed off some individuals by invoking my first amendment rights. However, some of my posts were quite good...like this one: Pulp Fiction written in March of 2007. It's interesting to read over some old posts from back when I was trying to find my voice.

Summer at Saratoga was hot and steamy. It was politics as usual and because I desire to exhibit there again next year I won't go into detail (no way gang). Overall, it's an honor to be there as an artist and I willingly persevered the bull***t. It's still the best racing in the country and witnessing the champion horses, trainers, jockeys and owners is a privilege even though it's an exhausting feat beyond measure. We achieve the marathon only with a huge reserve of adrenaline.

The best sellers were the prints on aluminum. They are vividly colorful, contemporary and something new. I also managed to create two oil portraits of champions Frosted and Songbird who both raced at the track twice. We experimented with prints on paper and that turned out very well.

I participated in a group equine art show at the Brookside Museum in Ballston Spa just south of Saratoga. Organized by my dear friend Sue Clark, it was fun and another entry for the resume. I wish I could have been more proactive with promotion but the show coincided with the race meet and dang, I still haven't figured out how to extend the day to thirty six hours.

My decision to exhibit my original oils at Spa Gallery was correct. They sold four pieces and were reluctant to hand over the ones that garnered interest. So, you can still see a few there.

Filling orders took up the weeks following the meet's end. Crossing off most from the dry erase board, we managed four days at the beach while it was still nice and warm. I was never so content to do absolutely nothing.

Last weekend I participated in a plein air event organized by the OPA (Oil Painters of America) in Londonderry, VT. No competition, just painting at a charming working farm. The drive alone was worth the effort. What a (still) beautiful state.

This week I made my way back to Oklahoma to plein air paint. Akin to a homecoming. 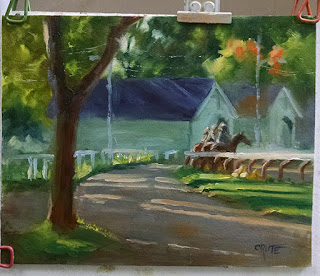 Next week I drive out to Geneva, NY for the Seneca Lake Plein Air Festival. It's a five day event and I sold well there last year.

Please stay tuned, some cool things in the making.
Sharon
Posted by Sharon Crute at 5:01 PM No comments: