The Mountain Maryland Plein Air Competition takes place in two weeks. I've been getting out everyday and practicing, studying and observing. I'm nervous, there are some real contenders, but I want this so badly that I have to get good at it. Eventually.

Along with my dogged perseverance and determination, there are sweet perks to this genre. One is being outdoors and becoming very cognizant of surrounding sounds and movement. Rustling woods behind me (always gets my attention), tones of bird calls and the light whisper of a breeze in the grasses. I go out alone - a gift I give myself.
For the past two weeks I've painted old abandoned barns in farm country not too far from my home. I try to be respectful and not trespass on anyone's property. At almost every place I set up, the landowners make an inquisitive visit to see what the heck I'm doing and who the heck I am. After feeling assured that my intentions are safe (I hand out business cards), they will spend some time chatting about the history of the farm. This information is priceless...and...these local family farms are rapidly disappearing.

Most of the families lease out the farms and property while they engage in other careers. Above is Spook Hollow Road and I'm told it's so named for a haunted farm that was in the vicinity. Tired farm buildings are to the left of the road (not in my painting). The crumbling house was the birthplace of the owner's father who worked the farm for 89 years. The house was built on an existing foundation dating to the 1700's. The owner told me that when he was a child (he's about my age - 60's) they would plant a personal vegetable garden behind the house and when tilling the soil would unearth relics from the Revolutionary War such as buckshot, coins dated in the 1700's, tools and other ancient artifacts. Can you imagine?
The Baker Farm is still very much a working farm but the barns above are no longer in use. The owner explained the endeavors of his relatives who work several large acre tracts in the area. That's the thing - the close-knit ties within generations of families that I find so fascinating. This particular owner works a day job as an engineer. As we spoke, very large and very modern machinery tilled the field across the road.
I didn't have a chance to meet the owners of the dairy farm. They were too busy tilling a nearby field as trucks and equipment came and went. The buildings were a blend of old and new and the barns were full of holsteins. I felt sorry for the cows, wondering if they ever grazed out in the sunshine. But I respect the lifestyle, it's harsh and demanding and at least there are plenty of birds and bugs everywhere - unlike the vast GMO crops I experienced in southern Arkansas. But that's another story...

Pondering all this, a hawk flew overhead with two crows in angry pursuit. As one crow dive bombed the hawk, the hawk spun a complete 360 to thwart the antagonist. Was this some type of metaphor for this disappearing aspect of American life?

I'm no philosopher,
Sharon
Posted by Sharon Crute at 4:24 PM No comments:

Why do I choke up when I hear the first sounds of  "My Old Kentucky Home?" I'm not from Kentucky and lived there a mere few months back in the mid 80's. I like it, it's a great place to visit but I have no desire to put away my suitcase in the bluegrass.

It's this: I recognize the insurmountable effort it takes to get to that illusive race. It's the holy grail. It's the equalizing dream of the rich and poor. The song represents the culmination of years, and I mean years, of repetitive work and a slew of passionate descriptives: hope, disappointment, promise, despair, determination, anticipation, perseverance, anguish, elation, exhaustion - insert your own word. No one puts in a more gargantuan effort than the horses, race trackers and the owners who finance the fantasies. It's a roller coaster of victories and losses. Highs and lows.

If they get to be the rare and "lucky" few, the emotional toll is stupendous. Imagine having to get through derby day, waiting, fretting, stall walking, trying to keep that runaway freight train of nerves and fears in check. I watch them being interviewed and I smile in empathy. Their faces reveal the contradictory feelings of excitement and dread. Even the old pros breath shallow gulps of air to keep their stomachs from flip flopping.

Phew! It's good to be an artist!

So, this year I didn't tear up when the horses stepped onto the track and the first notes of that very southern song began. Not even a bit of traditional mist. Every derby I've ever watched has been accompanied with embarrassing sniffles and disguising coughs. I don't know if this lack of sentiment represented anything significant. It just was. 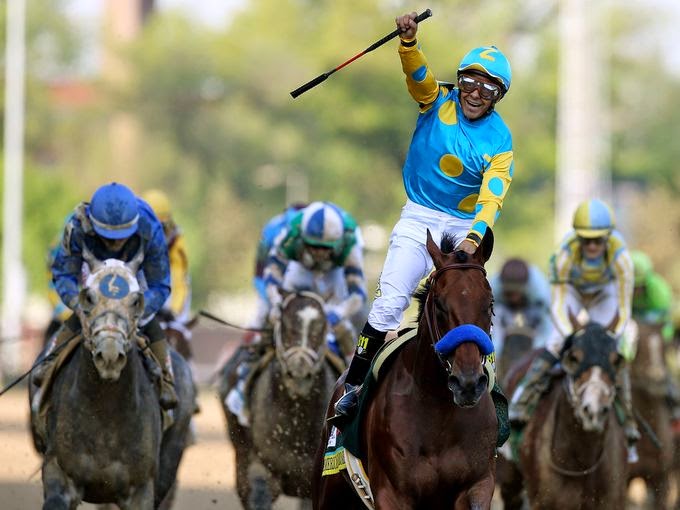 Weep no more, my lady,
Sharon
Posted by Sharon Crute at 1:49 PM No comments: