When a city experiences decline for whatever reason, it's akin to calling in the troops (artists) to save the day. Some of these projects have been extremely successful like Paducah, Kentucky, serving as a program model. Other attempts to attract artists to an area have experienced varying degrees of realization.

I love long, boring road trips where my wandering mind can clear out the daily pressures and open up to fresh ideas and inspiration. So it was after making a delivery in West Virginia that we decided to return home via western Pennsylvania to satisfy our curiosity regarding the Oil City program.
It's a city struggling to survive after major oil companies pulled out in the early '90's. If you look past the numerous buildings that have fallen into decay, the city is really quite beautiful. Situated on the Allegheny River (right on it, the river splits the city) and bordering the Allegheny National Forest, the central downtown is surrounded by steep, scenic hills. We met with the relocation administrator, Joann Wheeler, who graciously provided information and her time as she showed us around the National Transit Art Studios. It's a grand old structure erected by John Rockefeller and restored by Ralph Nader. Yes, that Ralph - it's a great story. Joann is also a wonderful artist renting a studio in the building. She was quite frank about what we could expect. Basically, many of the artists who have relocated to Oil City have established outlets and venues to sell their art. The migration is to cut overhead...a lot. Don't expect tourist or any other kind of traffic. Oil City is basically in the middle of nowhere. The closest metropolitan area is Pittsburg, about an hour and a half drive south.
Did I mention that an artist can rent a gorgeous light-filled, high-ceiling studio here for .49 per sq. foot?

We met with realtor Bill Moon at an empty home for sale. The real estate prices are in the cellar...it's astounding. We looked at a 3 bedroom 2 bath home that was in very good condition, needing just a bit of cosmetic work in the kitchen - $50K! Bill told us that 150K would buy us a decent Victorian. After living in Saratoga Springs, NY where real estate prices are off the charts, this was jaw-dropping!

Is something like this in our future? I never say never anymore but for now, no. I love this snobby town I'm living in and the Adirondacks and Lake George and, of course, the race track. Saratoga Springs would be just another dot on the map, struggling like so many other small cities of former glory were it not for those six weeks of horse racing every summer.

This gypsy stays put for now,
Sharon
Posted by Sharon Crute at 8:56 AM No comments:

The Good, the Bad and the Ugly

I survived another racing season at Saratoga Race Course. Now it's time to decompress from a brutal schedule and ponder the highs and lows of this yearly roller coaster ride.

Aside from an opening weekend of steamy and sweltering temps, the weather was lovely. A couple of days of on and off showers was an annoyance at most.

Sales were off. The slowness at the beginning of the meet made for sleepless nights and lots of hand-wringing. Thankfully, momentum picked up during the Alabama weekend and continued to the end. Theories were offered as to causes and effects from those who were honest enough to admit the actuality. I'm amazed at the spin some of my peers engaged in to make themselves appear fabulously successful. It's was really quite amusing to observe as they went to great lengths to create this fake aura. I guess it's the perceived competition and pressure to lure the money. What works and what doesn't is a complex tightrope walk and probably a subject for another post. Anyway, a long time merchant friend from Broadway told me sales were also off downtown. Broadway, really?

A big perk of showing at the track is the all great people I meet that I wouldn't have the opportunity to otherwise. I enjoy a captured audience everyday of anywhere from about 15,000 to 50,000+. Most people are very kind and generous with their admiration of my artwork and I appreciate their often candid comments. Yes, I suffer through the "my aunt (brother, mother, next door neighbor, ex-wife, whoever) is an artist" stories people feel compelled to relate. I'm also compared to other artists. As irritating as these remarks can be, I remind myself that these people were attracted to my booth because of my artwork. Overall, it's an amazingly positive experience and can often be an absolute hoot! Many people make a point of stopping by to visit every year - collector or not - and those relationships are priceless. And then there are the precious ones who visit every summer with the intention of adding another Sharon Crute to their collection. Bless you all.

The 150th Anniversary Celebration seemed to fall flat. I wish it had been marketed more aggressively to create an attraction not to be missed. Spin it. Hype it. Play it up to the max. The city did more to cash in on the opportunity than the track and that was a big disappointment, making it feel like just another race meet. It's was their party to be savored.

I did some plein air painting in the mornings on the backside and in the paddock during the races. Nothing like jumping into the proverbial fire! It attracted lots of attention and I was unsure that my skills were up for the challenge. I did it, I'm glad I did it and I'll be better at it next year. I did sell a couple of those pieces so I guess I wasn't too terrible. 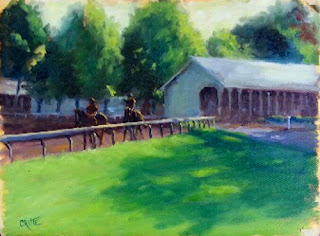 While painting in the paddock, I was gifted with a few private minutes with master painter Peter Williams. He's been painting plein air in the paddocks of major race tracks for years and he's so, so great at it. Surrounded by admirers and an entourage of adoring fans, Peter is a down to earth delight. He critiqued the piece I was working on and imparted a few gems of sound wisdom. Priceless.

Now for the ugly. A writer stormed into my booth one day to confront me with untrue accusations. He had made up his mind about this situation and was looking for someone to blame. He wrote about it in Bloodhorse Magazine and you can read it here. Obviously, he was clueless as to the entangled dance we do with politics on multiple levels. The whole ordeal was vastly complicated and was the low point of my summer. Unfair and biased.

But speaking of the media in much better light, I did a fifteen minute live interview on the cable OTB program with Seth Merrow. Nerve wracking but Seth put me at ease. Numerous people viewed it and made a point of stopping by my booth to tell me how they enjoyed it. I also had my picture taken while I was painting at the Oklahoma training track early one morning and it was published in the awesome Saratoga Special which is an enjoyable staple at the track every summer.
I really must find jeans that fit... 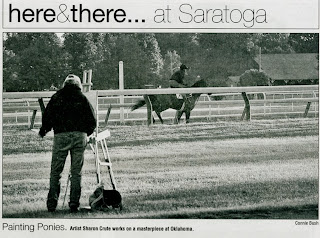 And of course there were the best of the best: trainers, owners, jockeys and great horses to be experienced as they made history. Tod Pletcher won yet another training title, the Ramseys slayed the owner's title, Javier Castellano took the jockey win title but it's all about the champion horses that make the meet for me. Palace Malice, Wise Dan, Cross Traffic, Princess of Sylmar, Royal Delta, Will Take Charge (and the surrounding controversy) plus a bunch of two-year-olds to watch as they impressively broke their maidens and scored in stakes. While the Graveyard of Favorites waved her mighty scepter (Verrazano, Orb), this is the cream of the crop and what makes Saratoga reign supreme.

The Grand Old Dame still stands strong through 150 years of the good, the bad, and the ugly. Regardless, I will always love her dearly and am honored to be a part of the milieu every summer.

Happy racing everyone,
Sharon
Posted by Sharon Crute at 10:28 AM No comments: