To my delight and surprise, my Indian Relay paintings have been accepted into the Phippen Museum's Western Art Show and Sale. I say "surprise" because the other participating artists are so impressive. As I drool over their artwork, I embrace a personal challenge. Whenever I encounter artists of accomplishment and considerable skill, it spurs me on (pun intended) to become a better painter.

Located in Prescott, Arizona, it's a journey of many miles taking place on Memorial Day weekend. We've booked lodging via AirBnB for a very reasonable rate and will be driving all my paintings cross-country to the show. No doubt the price of gasoline will increase due to the holiday as well as the expense of the booth fee, insurance, a required business license from the City of Pescott, meals, and not to mention the deepest expense - framing.

Also on the schedule: a reference gathering trip to one of the season's first Indian Relay races in Pine Ridge, South Dakota taking place the weekend following the show. Might as well go for it, we'll have traveled so far at this point.

So how to afford all this? I consider the expense an investment in my career revival and mental well-being. And that esoteric statement doesn't pay the bills.

Michael and I are working on a crowdfunding project to help out. You may recall a Kickstarter campaign I launched in 2013 in which I painted historical scenes of Saratoga to coincide with their 150th Anniversary at the track. It was meant to be a prelude to a bigger project and it's success effectively got my feet wet and gave me a feel for the mechanics.

This time around I have a clearer understanding of the "rewards" and can offer more effective incentives. And then there's those cool innovative techie things like going "live" on Facebook, enabling backers to travel vicariously along with us in real time.

So stay tuned for the "launch" of the funding campaign, certain to be more interactive and offering something for everyone. It's an exciting time for me and I hope you enjoy following along with my always daring exploits.
On the move,
Sharon
Posted by Sharon Crute at 2:04 PM 2 comments:

When I look over my resume, especially when I'm feeling invisible, I'm impressed with my career accomplishments. Working all over the country, I've enjoyed lots of publicity from very early on and have been involved in multiple varied and interesting projects.

Recently, it's occurred to me that not even my close friends are aware of my background. Michael has decided to create a brochure that showcases the highlights of some of these achievements.

In 1988 I was hired as a contract artist by the scenic arts department of Sea World of San Diego. The new Shamu Stadium was nearing completion and a 600' mural around the top perimeter of the seating area was proposed. I, along with several other artists were assigned the task of making it happen...quickly (why these projects are always last minute is beyond me).

The days were long and the work intense. Predictably, several artists quit. I recall the paint quality not being all that great either. The design evolved as we progressed, changing and tweaking to fit the space. The head designer wanted to create a native northwestern Pacific feel, and I think we did. 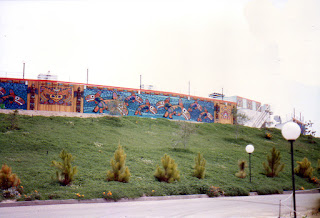 This is a small segment, the entire mural wrapped around for 600 feet. 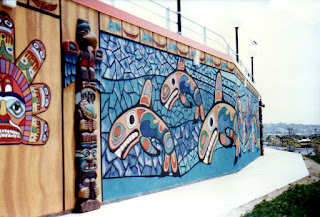 The sculptors in the scenic arts department made the totem poles out of fiberglass. The top border of dugout canoes and orcas was over 8 foot high. 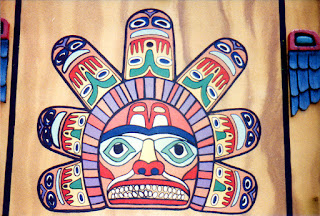 We created a wash to resemble wood and then painted these very cool totems. The fun part.

When the stadium was completed the main designer, impressed with my ability and work ethic (obtained from the race track of course), sent three artists plus myself to Sea World in San Antonio, Texas to complete murals in Cap 'n Kids Land. The entire facility would have it's grand opening within seven days and there was so much to do! Construction crews burned huge lights (like you see on the highway) to work 24-hours and we painted from sunrise to sunset.

This 20' mural was a Huckleberry Finn theme and there were lots of adjustments for the existing space and light. Construction operated all around us, or, I should say we painted around the construction. 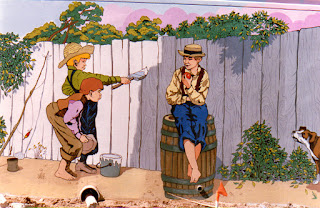 You can see the drainage pipe and flags at the bottom. I believe when we finished it was landscaped. 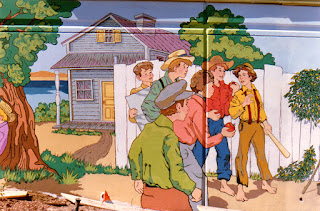 When we competed the murals on the afternoon before opening day, I asked the project boss if I could go into downtown San Antonio to see the tourist sights: the Alamo and the River Walk. None of the other artists would go with me...they were too whipped and opted to nap in their rooms.

The department must have been pleased with my work as the head designer wrote a glowing letter of recommendation for me.

I still have it,
Sharon
Posted by Sharon Crute at 2:09 PM No comments: