Fundraising in Our New Economy

As artists, most of us have learned to manage our own careers out of necessity as a result of all this economic turmoil. Fortunately, there's lots of marketing advice targeted to our field that's readily available. Social networking tools are a godsend for getting our work "out there" and we're quickly learning the value of engagement. And best of all, most of it is free! We're making these changes out of necessity if we want to keep making our art and keep making sales to support our efforts.

We're only a tiny part of the huge shift that's occurred in most business practices and models. Life as we know it has changed and change we must if we want to survive.

May I suggest that fundraisers and charities embrace the changes as well? Silent auctions and $150. a ticket soirees (most are comped) are quickly becoming passé. It's the same old, same old. Very unfortunately, most attending these functions are bargain shopping instead of sincerely supporting the cause of the fundraiser. I get requests for donations weekly and I'm usually amiable about helping out. However, when my donation is "purchased" at an underpriced bid, it's hurtful to my clients, my pricing structure, my life-long career of building my reputation and my efforts to continuously pursue excellence with my skills as a painter. Also, the fundraiser is usually unaware that we as artists cannot write off the retail cost of an item...only the materials used in it's production. So, let's see, I've had this brush for X years at a cost of Y and used it Z times.Get the picture?

A bill introduced by Sens. Patrick Leahy (D-VT) and Robert Bennett (R-UT) called Tax Fairness for Artists and Writers  has never gotten passed the introduction phase. Why? I realize the pressing nature of this bill is far down the list of priorities for the greater good of this country. However, with all the funding cuts adversely affecting charities, it's a win-win situation for both artists and fundraisers. In a nutshell, an artist would be able to deduct a fair market value for a donation of their art enabling such artists to generously give something of much higher value thereby enhancing the fundraising capabilities of charities.

And as an aside, I personally believe that fundraisers must now also embrace the said changes. I think creativity in fundraising is necessary to generate renewed interest in their efforts from would-be supporters. Instead of the tiresome silent and live auctions with the same predictable items offered, why not try to create something like an online treasure hunt where registrants participate (for a fee of course) in a game similar to a poker run. They could be directed to websites of like causes to obtain "keys" (purchased, of course) that over a set period of time ultimately ends with a grand prize for the winner. This could also create partnerships and networking opportunities with similar organizations. Hey, I'm just brainstorming...the point is: get out your thinking caps and do something interesting and different and fun to attract the givers. The auctions are not working and in any business, when something isn't working, it's trashed to allow new ideas to come forth.

Posted by Sharon Crute at 6:53 PM No comments:

My new work space is larger. I now have room to exhibit and help promote a few special artists whose work I admire. I'm very excited about this new direction as I now get to play the role of gallery director.

Let me introduce "my" new artists!


I have tremendous admiration for artists who are adept with acrylic paints. Bob's masterful control of the medium creates an exclusive style of fluid brushwork that builds on multiple layers of transparent glazes. With a wide range of subjects, he skillfully documents his observations. This is the artist that mentored me this past year as I diffidently stepped out of my equine-only paint box. So there you are. Check out Bob's website here.

Sue is a multiple award-winning photographer (really). In this series, she examines the macabre world of dolls and mannequins...those plastic objects that are meant to mimic humans, mostly female. These strange effigies become subject for her exploration that creates an edgy and provocative exhibit: "Valley of the Dolls." To visit her website, click here.

Jools lives in the Ozark mountains of Arkansas. We met several years ago when I was exhibiting in Hot Springs. Over the years, we've stayed in touch as Jools' paintings have evolved into abstractions of harmonious, sumptuous color and painterly form. His compositions appeal to my sense of movement and intensity. Oh yes they do.


Welcome to my gallery dahhhlink,
Sharon
Posted by Sharon Crute at 5:09 PM No comments:

The process of making art is as infinitely varied as the art itself. Every artist has their own way of finding inspiration and transforming it creatively. That's the magic spark, the beginning. From that moment of scintillating insight, a series of actions follows that will eventually produce a piece of art - be it a painting or a theater production of whatever the end result is desired.

Many people are not aware of the tremendous work the process often entails. It can be a long road from idea to completion. There is the preparation of materials which includes lots of trial and error in first choosing the supplies that suits the artist and at the best price. Highest quality paint is not cheap.

I prefer to stretch my own canvas simply because commercial pre-stretched canvas is awful. We begin with a textured 11 or 12 ounce canvas that has adequate tooth to hold my thick paint application. I say "we" because my husband Michael has blessedly taken over stretching duties at this point. He pulls the canvas over wooden strips, or stretcher bars and staples it in the back leaving the sides of the canvas smooth (known as a gallery wrap). Once he's finished, I begin applying the first of three coats of gesso creating a barrier between the paint and raw canvas. Coat one is mixed with a bit of water to penetrate the canvas fibers and given a day to dry. Coat two is mixed with an acrylic medium to provide flexibility and given another day to dry. Before applying coat three, I lightly sand the surface to create a bit of tooth and then apply gesso full strength. After another day of drying the canvas is ready for a ground (a neutral wash of color to eliminate the stark whiteness). Yet another day to dry and then I'm finally ready to paint! It's a labor of love...really... but you get, um, the picture. 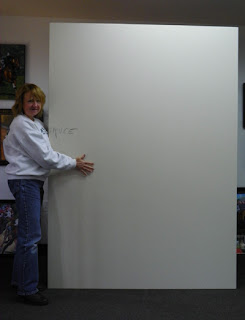 Before beginning the painting - and this is assuming the artist is clear about what they want to express - there is usually some preliminary sketching. Sometimes a lot of sketching. Perhaps the artist requires photographic material or is compelled to research the subject that further demands untold hours at the library or on the internet. When finally proceeding into art-making, that process often takes on a life of its own that doesn't always cooperate thus requiring the artist to make time-consuming changes and other adjustments throughout. 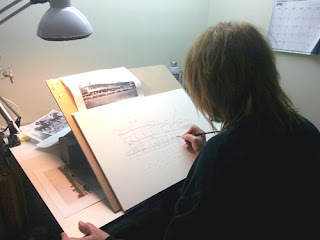 My point is that making art is diligent work. A beautiful finished piece is a joy to behold but know that it doesn't gracefully manifest by divine intervention as some have naively intimated. Yes, we've all heard it. This is about process and I've haven't even mentioned the time (years) and effort (extraordinary) to develop skills and techniques that continues throughout the career of an artist. Please consider this before gasping at the price of an artwork next time you're in a gallery.

With a heavenly sponsored talent (!),
Sharon

Posted by Sharon Crute at 5:48 PM No comments:

I heard that a few barns of the original Sanford Stud Farm remained intact. Formally Hurricana Farm, the impressive facility was established by Stephen Sanford in the 1870's. Located on the Perth/Amsterdam border here in New York, I can't believe that I've driven Route 30 right past the huge mare barn without noticing it. Sadly, it's now surrounded by encroaching strip malls and parking lots.

The result of his physician's urging to buy a peaceful place in the country with a couple of horses, Sanford built a farm of over eleven hundred acres with an impressive roster of thoroughbred champions. That would include the 1916 Kentucky Derby winner George Smith and the first American winner of the Grand National Steeplechase, Sergeant Murphy. I guess some people are not wired to do things in a small way. 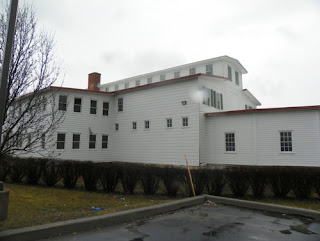 This was the mare barn, looking more like a factory, as viewed from the parking lot of a store I can't remember. 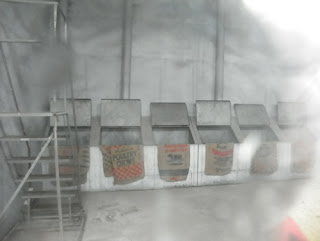 The old feed bins are visible through a window. 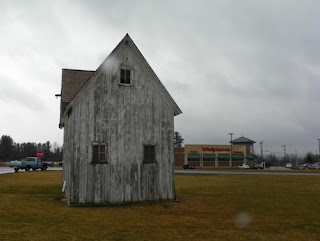 This lone barn sits behind the mare barn, possibly once housing a stallion. Notice the Walgreens in the background. Constant traffic travels an access road. 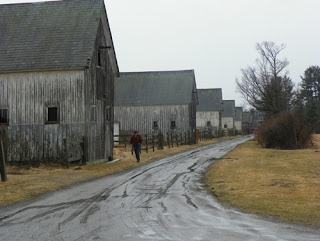 I'm walking down a row of mare and foal barns that have remarkably weathered the years. Even the paddock fencing still stands. This is on the other side of the access road. 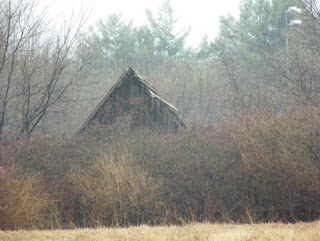 If you look further back behind the row of mare and foal barns, neglected remains of other buildings are visible in the distance. We could feel the ghosts of so many horses, hear their calling and footfalls as they're led to and from the barns. Can you imagine the tales and secrets contained within these sturdy walls that stubbornly hold fast against the ensuing years? It eerie and bittersweet but it's hallowed ground to me. I'm grateful to the Friends of Sanford Stud Farm who work to preserve what's left of this very historical farm.

It's been said that the horses were walked to the Saratoga Race Course. That would be almost thirty miles!

A little history for my horse peeps,
Sharon
Posted by Sharon Crute at 4:17 PM 1 comment: